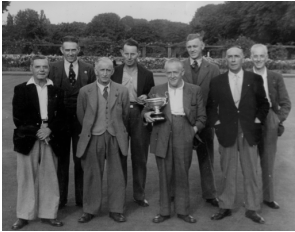 The area in which the Bowls Club stands was purchased in 1879 by the members of
the Windlesham Institute (now the Windlesham Club & Theatre).
The first green was established in 1933 and comprised only three rinks. It was
enlarged to six in 1947. One of the principal proponents for the enlargement was
Harry Ledger, who was a founding member of the club. His son Derek, who is a
current member, remembers as a young boy, the project being carried out with
enthusiasm and hard work. In 1988 the old club house which was attached to the
rear wall of the Windlesham Club and Theatre, was  demolished. A new club house
largely funded by the National Lottery, was built on its present location.
The green underwent major refurbishment in 2001 to bring it up to county standards.
It was made square, increased in size and new ditches installed.